Laying a suppressed 9mm pistol on your night-stand makes a world of sense:  gunshots are deafening indoors. Yes, you can shoot +P through a suppressor, but to maximize the benefit of a silencer, you should shoot subsonic ammunition… but there's always been a Catch 22. Subsonic ammo is typically Full Metal Jacket, unsuitable for defensive use, especially inside an occupied dwelling! Subsonic hollowpoints have never before been available because the low velocity was insufficient to initiate expansion, so you were right back to shooting ball ammo. Not any more! Super Vel cracked the code of making a subsonic expanding bullet with a 115 gr. Solid Copper Hollow Point that expands dramatically at subsonic velocity (1,000 fps). We did it with special heat treatment to our proprietary copper alloy, making the bullet expand to over .700 caliber while deploying six sharp cutting petals— and penetrating 13 inches in ballistic gel. This is just what the doctor ordered for subsonic defensive 9mm ammo! You're shooting a reliably expanding SCHP through a suppressor, yet achieving all the stopping power previously only encountered with supersonic ammunition. Super Vel… first we invented the jacketed hollow point, then we perfected it. 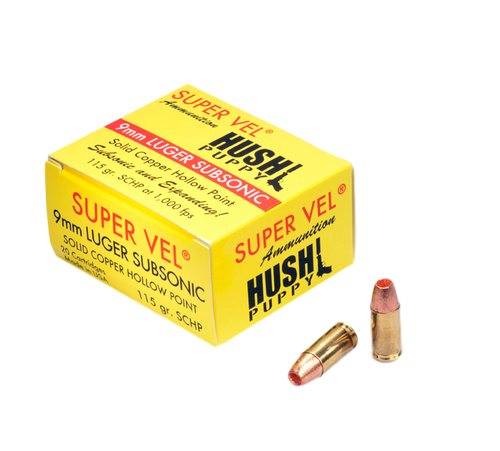