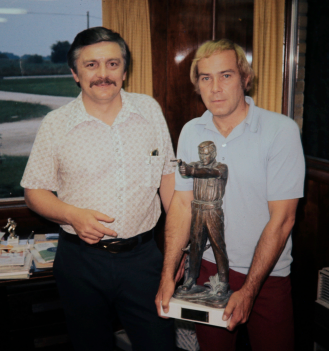 Super Vel is a tale that spans five decades, a story that speaks to everything that's great about America— a pioneering spirit, dogged determination, a love of guns and shooting, bold visions and even bolder men. It's also a story of missed opportunities and sad endings— the original Super Vel was forced to close its doors— but it's also a story of redemption and revival. There's even an Horatio Alger character in the Super Vel story, a hard-working, dedicated visionary named Lee Jurras.

Lee Jurras coined the name Super Vel— “vel” is short for "velocity"— and was the driving force and inventive mind behind Super Vel's greatest accomplishment, the invention of the jacketed hollow point bullet. The idea for a jacketed hollow point handgun bullet, like so many clever ideas, took root in several minds simultaneously. Jim Harvey, a pioneer of handgun ballistics, had been working with jacketed rifle bullets and modifying them into handgun projectiles with a hollow point to facilitate expansion. Jurras was doing the same thing, cutting off .358” caliber rifle bullets, making a hollow cavity in the end and loading them in .357 Magnum. While Harvey and perhaps other experimenters toyed with the idea, Jurras put it into action.

Jurras’ new company, Super Vel Ammunition, put jacketed hollow point on center stage with police departments and federal agencies. By using a light bullet of 110 grains in .38 Special and .357 Magnum, Jurras could push the velocity over 1,400 fps with a huge increase in kinetic energy, nearly 500 ft/lbs, but at the same time his bullets expanded dramatically, increasing the frontal surface area of the bullet to cut a larger wound channel and to slow it and stop it from exiting. Jurras and his partner J.D. Jones tested his super-fast new bullets on everything from car doors to blocks of wet clay to stacks of newspaper and, yes, big game animals. The proof was overwhelming— the jacketed hollow point was far more effective at "stopping power" than conventional bullets.

J.D. Jones of SSK Industries was Lee’s original partner. They worked together to develop Super Vel in its early days with Lee handling the production, administration, sales and marketing while J.D. performed much of the load development. J.D. Jones remains a close friend of the new Super Vel and serves as an advisor and consultant.

Super Vel also loaded subsonic 9mm Luger cartridges with a 158 gr. FMJ which was type-classified by the U.S. Navy as the Mk 144 Mod 0 9mm. It was for a special S&W pistol fielded by the Navy SEALs in Vietnam called the Mk 22 Mod 0 but better known as the Hush Puppy. The gun was a highly modified version of the Model 39 with a suppressor to take out Viet Cong guard dogs as the SEALs snuck behind enemy lines to rescue POWs and downed pilots— hence the name Hush Puppy. Today, we offer the very same subsonic load, a duplicated of the original SEAL subsonic load.

When Super Vel burst on the scene in 1963, virtually all policemen carried .38 Special service revolvers and the standard load was a 158 gr. lead roundnose trundling along at a lazy and sedate 850 fps. This load was absolutely terrible, with little kinetic energy to affect an instantaneous "stop" yet with a bullet profile that over-penetrated and went ricocheting all over the neighborhood. Jurras and his 110 gr. jacketed hollow point would solve this, and solve it in spades.

Lee's influence spread far and wide. In 1972, Lee started the American Handgunner Awards Foundation, bankrolling the organization out of his pocket. "Lee funded the entire thing, from commissioning the statue that goes to award winners to paying for the banquet," J.D. Jones recalled.

Additionally, Jurras wrote a book on handgun hunting with Maj. George Nonte, his close, longtime friend. Jurras also developed a line of exceedingly powerful handgun cartridges known as Howdah cartridges! The pistols that fired these monstrous rounds were brand-new at the time, single-shot breech loading "Contenders" from a man named Warren Center (who would go on to win an Outstanding American Handgunner in 1980).

The bullets were radically new at the time and sported half-jackets with exposed lead tips. Jurras called these "jacketed soft nose" and the term became accepted industry-wide for a new style of handgun bullet. The jacket on the bearing surface of the bullet allowed the projectiles to be driven far faster than lead bullets.

The first Super Vel Cartridge Company was formed in 1963 in Shelbyville, Ind. with Lee Jurras as the president. Two years later, in 1965, his good friend Ernest "Ernie" Wallein joined the company as an investor; he took the title of Secretary/Treasurer. Ernie has passed away but his son Kevin has the original of Ernie's typewritten account of Super Vel, The Super Vel Story, which should be read in its entirety by any student of Super Vel.

According to Ernie, the fall of 1967 was the tipping point for Super Vel when the Los Angeles County Sheriff's Office adopted Super Vel. Word spread like wildfire and law enforcement agencies from all across the country stampeded to Super Vel and its hot, new jacketed hollow point bullets at sizzling velocities. Two years later, in 1969, Super Vel had so many police orders that they couldn't keep up.

However, Jurras and Ernie ran up against a major problem when their "Police Ammunition" became so enormously popular because the big ammo companies were not at all pleased to see some upstart little company stealing all the police business. All's fair in love, war and the ammunition business, so Winchester, Remington and Federal refused to sell brass cases to Super Vel, attempting to cut off their brass supply. The big boys engaged in various unethical shenanigans, according to Wallein, to try and discredit the upstart ammo maker. (See Ernie's first-person account of what happened in The Super Vel Story.) Eventually, Super Vel was forced to buy brass cases from Norma in Europe, and other off-shore suppliers because the Big Three domestic ammo makers had cut them off. This upset their supply chain, thereby disrupting production and giving the Big Three a chance to horn in.

But Super Vel's problems were not limited to obtaining components. At the same time, Super Vel's potent 90 gr. JHP 9mm Luger load was drawing some concern for being "too hot" for the then-new Smith & Wesson Model 59, the first American-made double-stack 9mm pistol. The feedramp on the Model 59 was cut such that a good portion of the rear of the cartridge was unsupported by the chamber, and some case "blow outs" occured on the Model 59. Word that Super Vel was "too hot" spread. It was hard to explain that it wasn't the ammo, it was these new guns with their feedramps and unsupported chambers! Of course Super Vel's competitors were only too glad to pass along these stories of blown-up guns!

Meanwhile, a much more grave situation was developing in Shelbyville. The federal government charges an excise tax of 11 percent on ammunition and Super Vel had gotten behind on paying its excise tax. The amount owed grew to $305,000 of which $145,000 was the actual tax and the rest interest, according to contemporaneous newspaper accounts. Super Vel made arrangements to pay $4,000 per month to satisfy the tax bill, but even that was unworkable for the struggling firm. Unable to buy brass cases to make ammunition, Super Vel had no cash flow, no sales and no choice but to allow the IRS to seize all their property and sell it at a government auction. In January, 1975, Super Vel's doors were closed.

On Jan. 5, 1975, the IRS conducted an auction of Super Vel's property and the buyer was W. Robert Hamilton, a realtor from nearby Connersville, Ind. Hamilton also happened to be the chairman of the Fayetteville County Republican Party. Hamilton changed the company name to H&H Cartridge Co. but retained the Super Vel brand name. Subsequently, Hamilton relocated the business to Greensburg, Ind. Later, Hamilton sold Super Vel's equipment, tooling and inventory to FPC Inc. from Fond du Lac, Wisc.

FPC set about producing police training ammo, called Super Vel Qualifier. FPC Inc. went out of the ammo business around 1981; their trademark expired in 2006. The Super Vel story was over, at least for the time being.

First things first. A call to Lee Jurras was in order. Despite the fact that Jurras had lost his rights to Super Vel, the name Super Vel will always be associated with the legendary handgunner, and so Hopkins felt that Lee's permission was needed. While the two had never met face-to-face, Lee and Cameron shared a number of mutual acquaintances, not the least of whom was J.D. Jones.

"I have no further use for that name," Lee told Cameron on the phone. "You may have it, with my blessing."

With Lee's permission, Hopkins purchased the trademark for Super Vel Ammunition and set about not just duplicating, but surpassing the original Super Vel loads. Using a ballistics laboratory meeting the standards set by the Sporting Arms & Ammunition Manufacturers Institute (SAAMI), the industry body that governs the specifications for firearms and ammunition, all new Super Vel loads were tested in a pressure gun using solid copper hollow points, jacketed hollow points and full metal jacket bullets. All new powders were used in the development, powders that had not existed in Jurras’ day. And now today, the new Super Vel indeed provides exactly what its legacy demands—high velocity stopping power.