Projectile weapons have been employed since Biblical times. David did not just grab some pebble off the ground, he carefully selected the right stone from a nearby brook, polished smooth by the water's current, one that would fly true, hit hard and kill the mighty Philistine named Goliath.

The ability to inflict bodily injury— from a safe distance away— is the purpose of  projectile weapons. From a battleship's 16-inch naval gun to a policeman's 9mm service pistol, every projectile weapon requires two things of its payload— accuracy and stopping power. David picked a polished stone for its accuracy, but he also picked one with some good mass for taking down a giant! He may have never heard the term, but David understood ballistics. 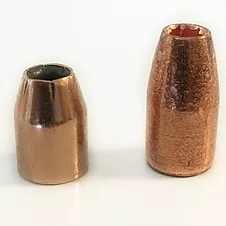 Two types of expanding bullets are the Jacketed Hollow Point and the Solid Copper Hollow Point. Both have proved themselves in the science of terminal ballistics, discussed here.

Gunpowder changed warfare because gunpowder greatly enhanced the power and accuracy of projectile weapons. No longer did a projectile rely on human muscle or a mechanical implement, like an archer with a bow, to deliver a lethal hit from a distance. Now a gray-black powder did all the work, launching a "bullet" with much greater velocity (which translates to distance) and accuracy than any previous object-hurling system.

Bullets evolved along with firearms. Primitive match-locks gave way to wheel-locks which in turn developed into flint-locks and eventually the percussion cap dispensed with the need to strike a spark to light the gunpowder and, before you knew it, the self-contained metallic cartridge was introduced. Meanwhile, bullets progressed from round lead balls to conical lead balls. Rifling was invented to better stabilize these bullets, and soon a gilding metal jacket was applied to the lead to create a bullet that could achieve even higher velocity— and with velocity come greater range and greater stopping power.

As bullet technology progressed, bullets became specialized. Soon there were hunting bullets for game animals, super-accurate bullets for target shooting, specialized bullets for military applications and even bullets for disabling a bomb (a solid tungsten projectile traveling at over 5,000 feet per second can be used in a device called a "disruptor" to disarm a bomb by taking out the timer that activates the bomb).

Internal ballistics addresses such things as the chamber pressure created by the powder gases, the twist rate of the rifling, the dimensions of the chamber, leade and throat, any erosion of the rifling (and bullet) by passing through the bore, the harmonics of the barrel, the effect of the muzzle crown on the bullet and even the effect of the barrel's temperature on the bullet (the "cold bore" first shot effect).

External ballistics looks at what happens to a bullet in flight. How stable is a bullet? What effect is the passage from supersonic to subsonic velocity? What about "spin drift" (the effect of the rotational forces on a bullet) and how does the wind affect the bullet? External ballistics applies to everything, but especially to target bullets.

Terminal ballistics concerns the bullet's performance in a target medium. For the purposes of Super Vel Ammunition, the target medium can be assumed to be an animal because our ammunition is primarily made for the purposes of hunting big game or stopping  human threats that have demonstrated both the ability and desire to inflict grave bodily harm or death on an innocent person. Super Vel founder Lee Jurras invented an entirely new type of bullet, the jacketed hollow point, for the sole purpose of improving the terminal ballistics of police service handguns. This remains our focus today.

Super Vel founder Lee Jurras invented the first expanding handgun bullet, which he called a Jacketed Hollow Point. He initially experimented with .35 caliber spitzer rifle bullets (.358" diameter) which he cut off to expose the lead core, drilled a small cavity into the lead, and then shot them from a .357 Magnum. Lee perfected the design of his Jacketed Hollow Point by making his Super Vel bullets lightweight for their caliber, and using dead-soft lead for the core material and a thin copper jacket to encase the core. The size and shape of the hollow cavity was also determined.

Lee also boosted the velocity— the Vel in Super Vel is short for "velocity"— to unheard of levels. When the average cop in America was carrying a .38 Special revolver stoked with 158 gr. Lead Round Nose bullets waddling along at perhaps 850 fps, Lee put out a 110 gr. JHP at over 1,250 fps! Needless to say, Super Vel took the police market by storm!

The jacketed hollow point itself evolved over time. Super Vel eventually closed its doors in the 1970s (see "Our Story") but the JHP lived on and got better. Innovations such as skiving cuts, chemically bonded jacket-cores and various coatings on the jacket were all tried. The JHP became a better bullet, but it was still subject to its inherent design weakness of being made from two different parts, a jacket and a core.

The Solid Copper Hollow Point picks up where the Jacketed Hollow Point leaves off. With a homogeneous constriction of pure copper alloy, an SCHP cannot "break up" or "come apart" in a soft-tissue target medium, a potential issue for even the best JHPs. Even more important, an SCHP has the ability to break through physical barriers and reach the target medium in tact. Physical barriers include automobile windshields, doors, walls, anything that comes between the bullet and its target. The Solid Copper Hollow Point has proven to be "barrier blind" and performs as if no barrier exists.

So what is the best type of bullet? It depends on your criteria. If you're judging by external ballistics, a target bullet with a high ballistic coefficient, a low drag coefficient and a target ogive and boattail might be the best. If you're looking to minimize the sound signature from a pistol, subsonic ammunition would be indicated. But if you're seeking the best terminal ballistic performance, you want an expanding bullet. Super Vel offers both types of expanding bullets, a Jacketed Hollow Point and a Solid Copper Hollow Point.